Everywhere you turn now-a-days there is deception, scandals, and someone trying to rip someone else off. Well Big Food is no different. They employ all sorts of tactics to get you to buy their products and make you think they are good for you while the USDA and FDA turn a blind eye.

Here’s 12 ways you are being taken for an idiot. Your weapons are your knowledge and your dollar you can spend somewhere else, so read up and get to fighting.

1. Much Of The Packaging Is Misleading, If Not False Advertising 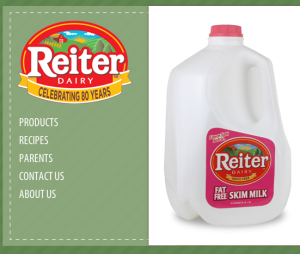 Next time you’re at the grocery store, look at all the dairy products. How many of them have pictures of a green pasture, a farm and perhaps a cow on the pasture even? Some of them, even paint this quaint, soothing picture with their logo, such as Reiter Dairy shown in the screenshot from their website here.

What’s wrong with that? Well on the surface, nothing. Cows should be raised on pastures and let to graze grass for their food. But how many of those products do you think come from cows that graze on grass in a pasture? Probably not very many.

The ugly fact is, many, many, many cows, if not most cows are not allowed to even set hoof on pasture. They are penned up nearly continually in feed lots where they aren’t fed grass (more on that later) but corn and other feed and walk around in their own feces. Why do you think we need to pasteurize milk? To remove bacteria from the cow’s own environment.

This is just one product example. Marketers are clever at presenting a good picture to make you feel good about what you’re buying and make their product seem better than others. Lawyers review everything to make sure the company is just on the gray side of actually falsely advertising.

2. Ground Beef Is Not Actually Beef

Remember the Taco Bell “meat” scandal? Some people claimed to discover Taco Bell’s “meat” was only 35% (or 36% depending on the source) ground beef. The rest is filler and all sorts of other stuff, including silicon dioxide which is mined from quartz and commonly used in food.

Problem? USDA to the rescue! Their standards clearly state that “meat” needs to be 40% meat content. I think that’s far below most people’s expectation of the percentage of meat in “meat” don’t you think?

Let’s look at what “ground beef” standards are. Apparently the contents of ground beef can include up to 30% fat in the US among other things, like up to 25% pink slime.

Now I’m not very good at math, so bear with me. If you start with ground beef then add 30% fat and 25% pink slime doesn’t that equal out to something like 45% actual ground beef? What’s the other 5% – oh, that’s right. Preservatives, ground quartz, animal bones, connective tissue, water and fillers.

Ground beef = ground almost anything we can add to it other than beef?

If I labeled something as “organic” what does that mean to you? I would think it would mean that it is made with all natural ingredients, grown in an all natural fashion and without the use of non-natural pesticides.

Consider “organic” bread. In order to label it “organic” it must be 95% organic. 5% can be non-organic ingredients according to our friends at the USDA. Labels can still have the USDA organic logo on them, however.

One step further though – perhaps to force producers to jump through the USDA certification process – the USDA restricts statements such as “Made with Organic Ingredients” if the producer isn’t USDA certified as organic. However, producers can list organic ingredients on the ingredients list. They just can’t compete with those who’ve paid the USDA. 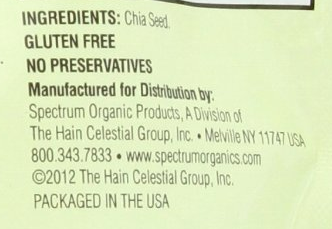 Some company names contain “organic” or “organics” or “natural” and other variations in them, which are no doubt purposefully selected to make you think their products are natural or organic and feel good about buying them.

One example is Spectrum Organics, a division of The Hain Celestial Group owner of a number of food brands.

They sell organic products. They also sell non-organic products, like this picture of the back of their Chia seed bag, are not organic. However, the company name including “organics” is right there next to the not-organic ingredients.

Is this a case of marketing trying to deceive you? I’ll let you be the judge.

Oh, by the way. Hain Celestial has a brand named “Earth’s Best” with one of those nice farm logos which produces milk with one of those nice pasture-looking images on the carton and is labeled USDA Organic, which means it’s cows must consume certified organic feed (95% of which must be actually organic) along with 30% of its feed from pasture and that the packaged milk for sale must also be 95% organic.

5. GMO’s are Contaminating Everything

If you have a non-GMO corn field down wind from a GMO corn field, do you think the GMO pollen will stay out of your field? Not until the GMO scientists figure out a way to make GMO crops non-pollenating.

Wall Street Journal tested GMOs in foods labeled as non-GMO a while back. It found “Of the 20 products tested, 11 contained evidence of genetic material used to modify plants and another five contained more-substantial amounts.” So 16 of 20 non-GMO foods actually had GMO in them.

Further, “No government agency or trade group verifies the accuracy of non-GMO labels. The U.S. Food and Drug Administration has approved the use of most genetically modified crops in human food, and these approved ingredients have not been shown to cause health problems.”

However, consider that the process of creating GMO’s requires a “gene carrier” which is usually a virus or bacteria, including e.coli to introduce the new DNA into the target.

There is a soil bacterium that was found to be resistant to Roundup. Manufacturers cut out that sequence of DNA, mixed it with E. coli bacteria and introduced a soil bacterium that caused tumors (so it would replicate) and forced that concoction into the DNA nucleus of the corn or soy. Source

U.S. Food and Drug Administration does not require biotechnology companies to do premarket safety testing. Source

I could go on. Do your own research so you can decide for yourself.

6. Euthenized Animals Are Being Fed to Animals

This is utterly disgusting. Euthanized animals from animal shelters are being used as feed for other animals. Could those animals then be turned into pet food? How do you know it’s not in your bacon?

Drugs that are given to cattle or horses to euthanize them have been shown to be in dog food that is in turn fed to dogs again, per the FDA! 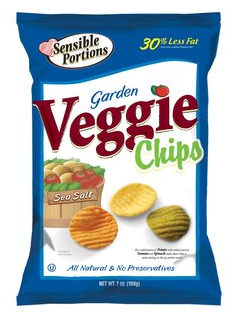 Potato is a vegetable, right? Let’s just call these things Veggie Chips and people will think they’re a healthy alternative to…. potato chips!

But wait, there’s more! Sensible Portions, which sounds so sensibly more healthy than some other brands, is owned by Hain Celestial. Hmmm.

Take a look at the list of ingredients. Sure, it contains things other than potato flour, like potato starch, as the first 2 ingredients.

Fun fact about canola. Tons of canola is GMO, and particularly fun is that it is resistant to Roundup®, which kills pretty much anything. But thanks to Monsanto, you can get canola seeds which will grow canola plants you can spray with Roundup® and they will survive this toxic nastyness.

Here’s the actual ingredients list for this bag of Sensible Portions Veggie Chips, courtesy of Walmart.com, an up and coming player in the healthy food market.

8. Will Chinese Lead And Lax Food Safety Be Part Of Your Diet?

USDA has recently allowed the Chinese to process chicken for us, without any USDA inspectors on site, according to the NY Times.

Fine, we as responsible people can choose to not buy it. Well, we could if it were a requirement to label said product as produced in China. But it’s not. So for now, cheap chicken = could be Chinese processed chicken.

Huffington Post points us to a number of fun articles about Chinese food safety issues for your nighttime reading enjoyment. Here’s some highlights:

Wow, this is a huge topic. Let’s just summarize it with a question; are the USDA and big food companies’ marketing departments misleading or lying to us?

Here’s just a couple simple ones from the USDA Meat & Poultry Labeling Terms.

Producers must demonstrate to the Agency that the poultry has been
allowed access to the outside.

What does “outside” mean? A feed lot where the poultry can roam around in their own dung? Or wallow around in it thanks to the hormones they’ve been fed so they can grow enormous breasts? (Side note – anyone see a coincidence with this and how young girls are growing breasts younger every day?)

“Fresh” means whole poultry and cuts have never been below 26 °F (the
temperature at which poultry freezes). This is consistent with consumer
expectations of “fresh” poultry, i.e., not hard to the touch or frozen solid.

Yep, that’s my expectation of “fresh” – not the fact that it was processed recently, it just wasn’t frozen solid.

10. Huge Companies Own Nearly Everything

This chart from PolicyMic is a great representation of how huge companies control nearly everything we buy, including the food supply. Let’s not forget Monsanto who controls massive amounts of farming, Tyson the chicken monopoly, Dean Foods to name a few others. 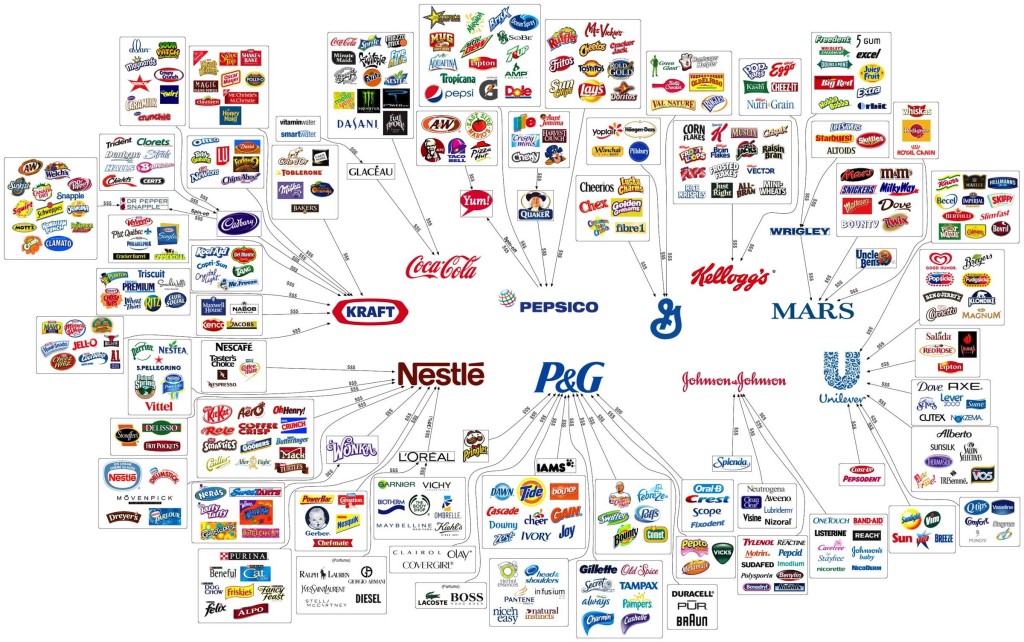 11. Many, Many Ingredients May Kill You

I’m not going to go through an exhaustive list here, it would take forever. Let’s just look at Whole Foods list of unacceptable ingredients first item as an example; Acesulfame-K.

Reported side effects: Long term exposure to methylene chloride can cause nausea, headaches, mood problems, impairment of the liver and kidneys, problems with eyesight and possibly cancer. Acesulfame-K may contribute to hypoglemica.

If you want to know more, just start from the Whole Foods list and Google for them and read up on what all those ingredients are, and most importantly, what they are composed of. There’s a lot of deception going on – like that whole re-labeling High Fructose Corn Syrup as Corn Sugar because of the bad rep High Fructose has gotten for being very unhealthy.

12. Our Government – The FDA, USDA and Others – Allow All This

Large corporations spend millions, if not billions lobbying political figures for favorable laws and regulations. They donate to campaigns, they throw parties, they get high level employees appointed to regulatory positions. And more. This subject is so overwhelming, I can’t begin to cover it here so I suggest you look into it yourself.

The bottom line is, the government isn’t going to protect you – just look at some of their regulations I’ve listed on this page.

The only person who can change this is you. Become knowledgable and informed. Spend your food money buying the most natural products you can and support the companies you believe are doing good, caring for the earth and for all of our wellbeing. There are some out there!

Did I Miss Something? Or Get Something Wrong?

Tell me! I’d love to hear about it in the comments.

12 Things The Food Industry Is Lying To You About