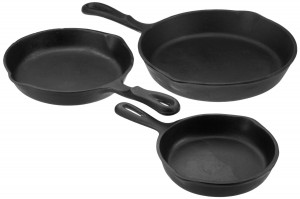 Cast iron cookware, generally speaking, is a kitchen staple. Not only do people use this type of cookware for its rustic, cabin-like look but also for its ability to last a really long time. Unfortunately, most people don’t know the proper way to use cast iron and in the end, find themselves with a heavy piece of cookware completely covered with stuck on food that has no intention of ever coming off!

Because no one wants to find themselves in this situation with hours lost at the kitchen sink, here’s a summary of why you should and how to season cast iron cookware.

Why Should You Season Cast Iron Cookware

Unlike many pots and pans you’ll find at the store, traditional cast iron comes straight to you with a stick-on surface. This means that anytime you cook food in it, be prepared for some of the food to stick to the cast iron itself. What you want to do now is turn your cast iron into a non-stick pot or pan. Once you do this, you won’t have to worry prying leftover food off its surfaces.

If you’d rather watch a video to see how to clean and season cast iron, here’s a good one by the one and only Martha Stewart. Detailed instructions are below if you’d like to print them out or keep them handy while seasoning your cast iron.

Because you’ll need more than your cast iron, you’ll want to gather all your supplies together beforehand. This will make the process a little easier for you. You’ll need your cast iron, a sponge or some sort of stiff brush, vegetable oil, butter or pretty much any oil you would like (some prefer olive oil), a clean dry cloth or kitchen towel and some dish soap, preferably Dawn soap. If you don’t have a kitchen towel, or rather not use the one you have, you can always use some paper towels in its place.

Yes, you read that right. In order to successfully season your cast iron, you’re going to need that oven. The ideal temperature to set it to is 325°F.

While you’re waiting for the oven to heat up, you’ll want to now wash and dry your cast iron. To do this, you’ll first wash the cast iron with warm soapy water. The amount of soap you use it up to you, just make sure that you get it all off when you’re done washing. This is also when you’re going to want to use that sponge or brush. Once you’ve got all of the soap off and are confident that it’s ready to go, it’s time to dry the cookware. Make sure that it is completely dry, you don’t want any water droplets left in it. This water will just end up creating ‘bubbles’ between your oil.

Now that your cookware is all washed and dried, it’s time to get to the main event. Using either your paper towels or your kitchen towel, you’ll now apply a thin coat of oil or melted butter to both the inside and outside of the cast iron. When using melted butter, make sure that it is melted enough to be the same consistency of oil. During this quick process, you’ll also want to make sure that the cookware is coated evenly, otherwise your cast iron may end up looking a bit uneven and off putting.

The final step is to place the cast iron upside down in the oven. It’s best to put the piece on the center rack as this will allow for a more even seasoning process. If you’re not a fan of cleaning your oven, this is also the time you’ll want to put a large piece of aluminum foil on the rack below. The aluminum foil will catch any drips.

There are lots of opinions out there, but most feel that an hour in the oven is enough to complete the seasoning process. If you’d like though, you can leave it in for another 10 minutes, though it’s best not to season for any longer than that. After the hour is complete, it’s time to open that oven door, but wait, you’ll want to stop there! Because the cast iron will be very hot, it’s best to leave the cookware in the turned off oven to let it cool.

When Should You Re-season Your Cast Iron

Though your original seasoning should last a long time, it won’t last forever. This means that you’ll have to re-season your cast iron from time to time. When that time does come, you’ll follow the same instructions, making the process painless and easy. Just keep in mind that a piece of seasoned cast iron should be smooth, non-stick and shiny. Once your cast iron starts to lose any of these qualities, that’s when you know it’s time to start all over again.

Because not all of us are cast iron connoisseurs, here are some helpful tips to keep both you and your cast iron in good shape: