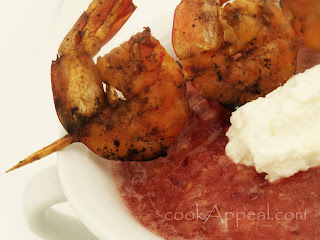 Gazpacho recipes can vary greatly in terms of ingredient composition, texture and viscosity. This usually depends on the geographical location as well as family traditions. This bowl of liquid salad originally came from Spain. Cookbook author Anya Von Bremzen says on The Splendid Table that “gazpacho” comes from the word “caspa,” which means “to break into fragments.”

The origin of the word gazpacho is uncertain, but etymologists believe it might be derived from the Mozarab word caspa, meaning “residue” or “fragments,” an allusion to the small pieces of bread and vegetables in a gazpacho soup. On the other hand, it may be a pre-Roman Iberian word modified by the Arabic. One will hear a lot about Mozarab when speaking of historic Andalusia. “Mozarab” is a corruption of the Arabic must’arab, “would-be Arab,” those Hispano- Romans who were allowed to practice their religion on condition of owing their allegiance to the Arab caliph as opposed to the muwalladun, Hispano-Romans who converted to Islam.

José Briz, who wrote a book on gazpacho, also suggests that the word derives from the Hebrew gazaz, meaning to break into pieces, referring to the bread base. Gazpacho was traditionally eaten by workers in the fields, whether they were vineyards, olive plantations, citrus groves, wheat fields or cork farms. Originally gazpacho was nothing but bread, water, and olive oil, all pounded in a large wooden bowl called a dornillo; it was poor people’s food.

Add all the ingredients to a blender and process until smooth, or just pulsate each ingredient to get a slightly textured gazpacho (hubby likes his to have some chewy texture).

Serve topped with ricotta cheese, smoked shrimp like mine or fresh crab meat.

Procedure
1. In a medium saucepan, cook the onion over medium-high heat, until it softens, about 8 minutes. Add the garlic and chili powder and cook 1 minute more. Add the tomatoes, orange juice, tomato paste, sugar, and cherries and cook 5 minutes more, stirring frequently.

2. Transfer the mixture to a blender or a food processor fitted with the metal blade and blend until smooth. Transfer to a plastic container and keep cold in a refrigerator or ice-filled cooler until ready to use or for up to one week (will appear dark).