When we think stand mixer, most of us probably picture the classic KitchenAid Artisan model. Available in an endless array of colors and with numerous options for multi-functional mixer attachments, it’s easy to believe that a KitchenAid mixer is a must-have appliance for any dedicated home cook.

Unfortunately, they’re fairly expensive. A brand-new KitchenAid Artisan stand mixer starts ringing in at $279.99, which puts it somewhere between “totally out of my budget” and “maybe after several months of dedicated saving” for a lot of people. (Unless, of course, you’re fortunate enough to receive one as a very generous gift!) While you can snag a KitchenAid Classic Plus model for $207.99, that’s still a pricey investment. There are other stand mixers on the market, but are they worth considering? Sometimes it’s worth waiting a little longer to get the item you really want, but in this case, there are indeed some admirable alternatives to the big K-A.

Let’s take a look at a few of the other KitchenAid alternative stand mixers on the market.

Not only is the 6-speed Cheftronic stand mixer a relative bargain at just under $100, it comes with three hooks (dough hook, wire whisk, paddle beater) and a splash guard. The Cheftronic mixing bowl capacity is 4.2 quarts, making it just a little smaller than the 5-quart standard size of the KitchenAid mixer. The overall design is more compact than the KitchenAid as well, making the Cheftronic mixer a viable choice for those who may be short on kitchen space. And while beauty is in the eye of the beholder, I personally think the Cheftronic looks pretty darn good. Amazon reviews are excellent (4.5-star rating) and general consensus is that the 550W motor is a champ. 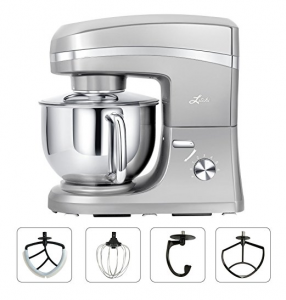 Our next budget-friendlier mixer contender is this one from Litchi. It’s larger and more powerful than the Cheftronic, coming in with a 5.5-quart capacity and a 650W motor, and also carries a strong 4.5-star rating by Amazon users. Another perk of the Litchi stand mixer is that it comes with four hooks (the three usual suspects, plus a flex-beater for scraping those pesky sides of the bowl), and the six speeds are augmented by a unique pulse function. This is a slick-looking machine with true workhorse capabilities. 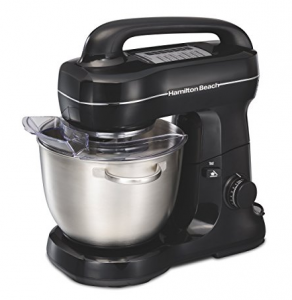 Admittedly, the Hamilton Beach mixer isn’t as chic-looking as the two previous options, but at $99, it’s a deal if you’re looking for a simple device to relieve you of excessive mixing duties. The 300W motor powers its way through seven speed settings, and the Hamilton Beach also comes with the requisite three hooks and a splash guard. The 4-quart capacity is suitable for tackling most baking projects, and the handle at the top of the machine is a unique feature lending an ease of mobility not seen in many other stand mixers. (Worth considering if you plan to stow your mixer inside a cabinet or deep drawer instead of leaving it on the countertop.) The handful of Amazon reviews have the Hamilton Beach stand mixer sitting pretty with a full 5-star approval rating, which is awfully difficult to argue with. 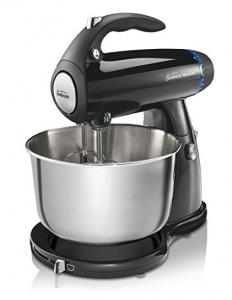 Clocking in at just $59.99, this Sunbeam model is a true budget mixer. It’s design is reminiscent of an electric hand-mixer, right down to the dual beaters. The machine includes dough hooks and egg beaters for the 4-quart bowl, and the 350W motor offers an impressive 12 mixing speeds. Reviews are hit-or-miss—averaging 3.7 stars—But if you won’t be implementing a heavy-duty use regimen, the Sunbeam stand mixer is fair contender for the everyday home cook. 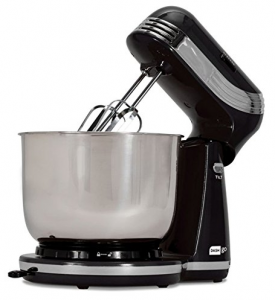 This entry-level stand mixer by Dash is the most budget-friendly we’ve seen ($40?!), and it’s also the smallest of the bunch at just a 2.5-quart capacity and a 250W motor. Accommodating for small spaces for sure, but also an option if you’re just looking to test the waters of a stand mixer and see if you’ll actually use one once you have it sitting in your kitchen. As one may expect, reviews aren’t stellar at just 3.3 stars on Amazon, but again, if you’re really on a budget and adamant about acquiring a stand mixer, do take a look at the Dash. 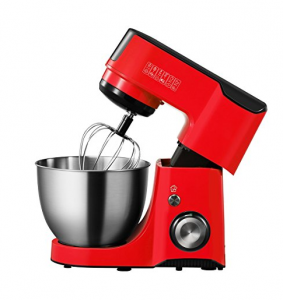 The Comfee stand mixer is an interesting contender, particularly as it’s available in two sizes: the 4.75-quart as shown here, or a 2.6-quart model (which, oddly, rings up at $10 more). Nonetheless, a fair price on mixers that have a 4.3-star rating on Amazon. The 350W motor powers through seven speeds, and the Comfee mixer includes the standard three hook varieties (dough, whisk, paddle). There’s also an assortment of colors to choose from if bright red isn’t quite your style. 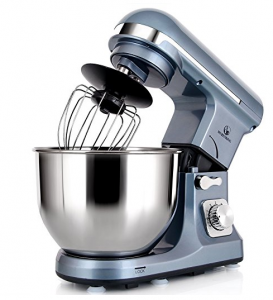 Our final budget-friendly stand mixer is this one from Murenking. A slick-looking piece with a generous 5-quart bowl capacity, six speeds, and a 500W motor, the Murenking aims to position itself as a professional-level stand mixer. As with the other assortment mixers, this one comes with the three usual hooks for added versatility. Reviews are largely positive, as evidenced by the 4-star rating on Amazon, and the machine is available in small handful of tasteful color choices.

It’s tough to beat the Litchi’s powerful motor, generous capacity, smooth lines, and positive reviews when we’re comparing stand mixers at this price point. As always, we encourage you to do your own research before buying, taking into consideration your own needs and cooking habits; but we hope this lineup has helped offer a few ideas if you’re in the market for a non-KitchenAid stand mixer!

Alternatives To The Iconic KitchenAid Mixer